With his artistic spirit, brawny physicality, and a pink scrunchie or two, the actor is the leading man we need. 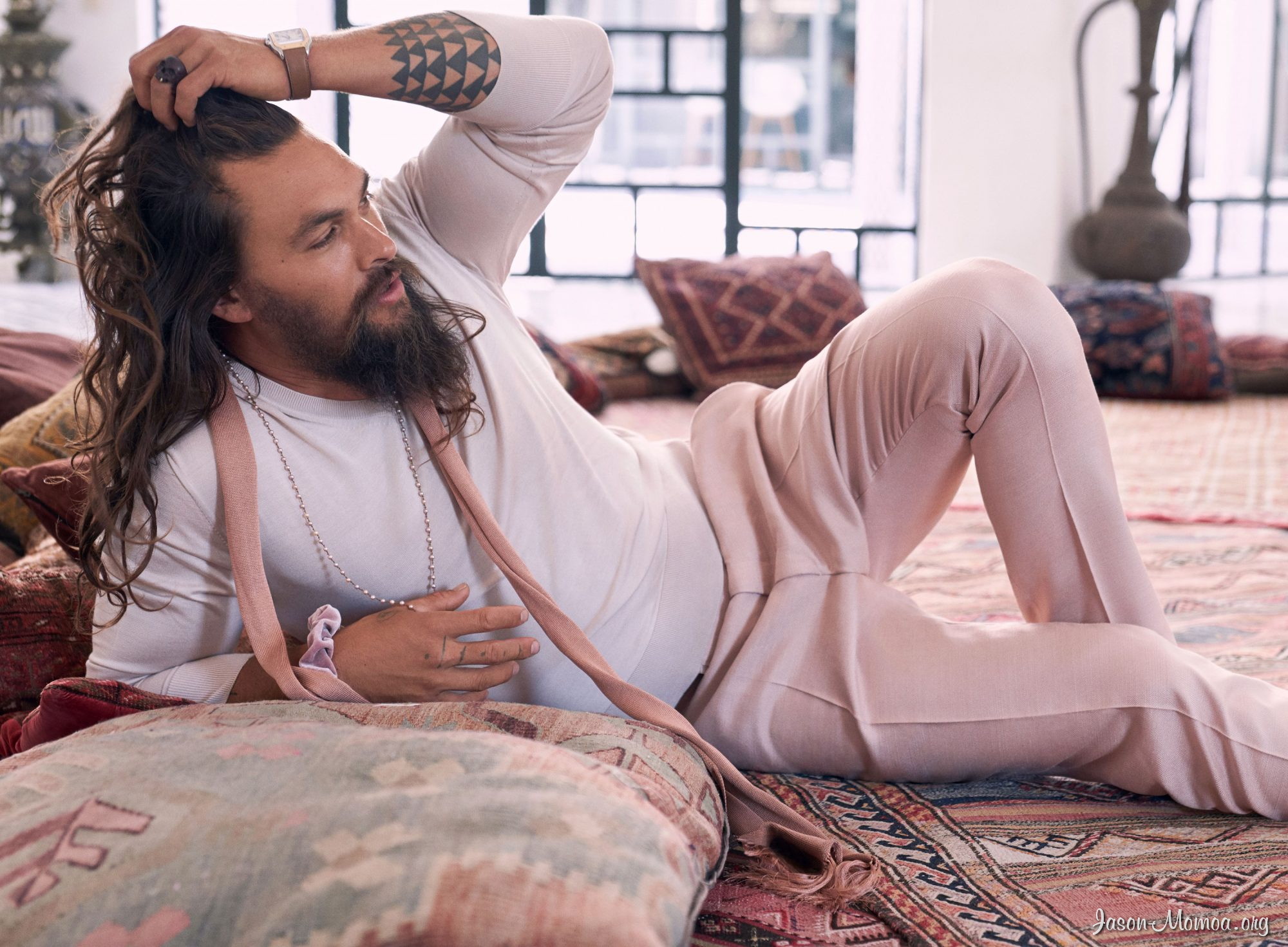 INSTYLE – On the morning of my interview with Jason Momoa in Los Angeles, I’m jolted awake in the predawn hours by one of the strongest earthquakes to hit the city in years. Later in the day a nasty brush fire breaks out near the house in Laurel Canyon where Momoa and I are set to meet, so on my way there I’m rerouted because a trio of fire trucks is blocking the main road.

If the apocalypse is slated for this very day, as it very well may be, then it’s hard to think of anyone handier to have around than Jason Momoa. Onscreen, the hulking 6-foot-4 actor has been all kinds of hard-core warriors and superheroes, and in the upcoming sci-fi epic Dune, he helps secure a hostile planet for his master, Timothée Chalamet. Surely I can count on him to protect me from any natural disasters that might occur in the Hollywood Hills. 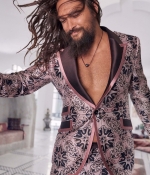 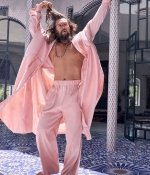 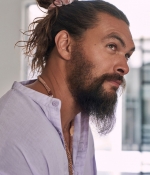 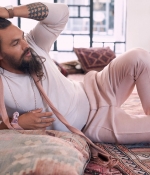 Yet it’s not entirely surprising when Momoa greets me in a pair of flowy pink-and-red-striped pants that he had custom-made from a set of French linens. Or when he tells me he recently started seeing a therapist and is exploring issues of male vulnerability. Momoa, you see, is many dudes in one. Part soulful surfer, part brawny he-man, part committed activist, and part class clown, he spent the quarantine painting and writing and teaching his 13-year-old daughter how to throw a tomahawk. Certainly he’s the only guy I’ve met who can build his own motorcycle and ride it to a film première dressed in head-to-toe pink. When I ask him why he’s so fond of pink scrunchies (today he’s wearing two — one in his hair and one on his wrist), he smiles and shrugs.

“Pink is just a beautiful color,” he says. “And I’m pretty secure in my masculinity. I don’t really give a shit what anyone thinks.”

In fact, Momoa points out, it’s only recently that people have been thinking much about him at all. Though he first made his name as monosyllabic warlord Khal Drogo in Season 1 of Game of Thrones, in 2011, his character was killed off before the series became a hit, and Momoa spent several years struggling to pay the bills at the Topanga Canyon house he shares with his wife, actress Lisa Bonet, and their two kids. “I mean, we were starving after Game of Thrones,” he says. “I couldn’t get work. It’s very challenging when you have babies and you’re completely in debt.” Things improved in 2016, when Momoa was cast in Justice League, and by the time he headlined the megahit Aquaman two years later, his zanily idiosyncratic Instagram posts and meme-ready red-carpet pranks were making it clear that there was a lot more to the actor than grunts and pecs.

Momoa’s unique background explains a lot about his unpredictable mix of charm and contradictions. He was raised by a single mother in rural Iowa while making regular trips to Oahu, where he was born and where his Hawaiian father still lives. “I’m definitely a product of two very opposite worlds,” he says. As the only mixed-race kid in his Iowa elementary school, he was an easy target for bullies, and later on the town jocks didn’t approve when he got into art and skateboarding. “I got beat up a lot,” he says. “Just for being slightly different—it was gnarly. I mean, I wore Birkenstocks in middle school, and it was like, ‘You are a freak!’”

In Hawaii, Momoa didn’t really fit in either — many locals dismissed him as a haole from the mainland — but his connection with the islands kept deepening as he spent more time with his extended family. One summer, at age 19, he was surfing on Oahu when he heard that Baywatch Hawaii was having an open casting call. “So I went down with all my cousins,” he says. “We just wanted to meet chicks. About 1,300 people showed up.” Offered one of the lead roles, he dropped his plan to study marine biology and became an actor. But when the series wrapped in 2001 and Momoa moved to L.A. to look for more work, it sank in that Baywatch wasn’t the ideal calling card. “I couldn’t even get an agent for three or four years,” he recalls.

Now he’s fully booked until about 2024, racking up coveted projects like See, the Apple TV+ series now filming its second season, and Dune, from director Denis Villeneuve (Sicario). When Momoa saw the Dune trailer for the first time this summer, he says, “It was ‘Josh Brolin, Jason Momoa, Javier Bardem,’ and I’m just like, ‘Oh my god. I can’t believe my name was with those names.’ I feel like I’m still a kid, freaking out.” The movie (whose release has been postponed to next October due to COVID-19) is the latest adaptation of Frank Herbert’s acclaimed 1965 novel. Chalamet plays young ruler Paul Atreides, and Momoa is his most trusted warrior, Duncan Idaho. With its saga about fierce clans sparring for limited resources on a hellish desert planet, Momoa says, the movie is all too relevant to today’s world. “It’s not alien versus alien — it’s about conflicts between human tribes,” he says. “And greed. It really hits home right now.”

Although in Hollywood Momoa’s name is synonymous with the very biggest of blockbusters, his friends and his Instagram followers know he’s naturally drawn to all things offbeat and artisanal. At his family’s home in Topanga you’ll find a hand-built skate ramp, a pet donkey named Freya, and all manner of custom-made electric guitars. Also, tomahawks. “I’m not a big fan of guns, so I like throwing sharp things,” Momoa says. “Everyone’s got their own niche!”

Back in 2010, when acting gigs were especially scarce, Momoa launched a production company with his best friend, Brian Andrew Mendoza, and started directing short films. Mendoza — who’s now a director too and who shot Momoa in the upcoming thriller Sweet Girl for Netflix — says his friend’s XXL frame and equally oversize personality make him all too easy to mistake for a WWE wrestler. “A lot of people don’t realize that Jason is a beast of an artist,” Mendoza says, recalling nights when he and Momoa would camp by the side of the road so they could capture a shot in the early-morning light. “Art is the thing that drives him, through and through.”

OK, so what has Momoa been figuring out in therapy? One key goal, he says, is learning how to switch gears when he gets home after 12 hours of filming a fight scene. “I’m amping myself up all day long, and then my nervous system doesn’t know that I’m not lopping people’s heads off,” he says. “For me to relax and sit still is next to impossible.” On a deeper level, Momoa is exploring what it meant for him to grow up without a father at home and how that affects his relationship with his 12-year-old son, Wolf. “I didn’t know what it takes to be a dad,” he says. “And I don’t want to just tell my son, ‘Because I said so.’ I really want to connect, and I want him to be vulnerable and open.” If any doubts remain about the significance of his two kids in his life, Momoa pulls his shirt open to show me the two tattoos over his heart: their first names, Wolf and Lola, written in their own kiddie handwriting. The designs were taken from the sheets of paper on which they first spelled out their names.

On the topic of sensitive males, Momoa talks with the confidence of a guy whose testosterone levels are never likely to be questioned. “I mean, I’m a warrior, and I will lay it down,” he says in a voice that’s somewhere between a rumble and a growl. “But I’m also the first one to say, ‘I have a lot of problems, and I want to be able to correct those problems.’ ” Mendoza says it’s no accident that two of the most important people in Momoa’s life — his mother and his wife — are both extremely strong women. And although Momoa is deeply skeptical of those who downplay the biological differences between the sexes (“I mean, we’re fucking men!”), he stresses that “we all have the feminine and the male side in us, and we need to embrace both.”

Bonet, serene and yoga-toned at 53, has 12 years on her husband; Momoa says she’s been astonishingly patient with his juvenile ways. The former Cosby Show star is the calming force in the household, while Momoa is basically always crazy, he says. Yet their values align in fundamental areas such as parenting and politics. One of Momoa’s key projects is a new line of canned drinking water, Mananalu, launched to address his biggest environmental peeve: single-use plastics. “I thought, ‘You know what? I don’t want to be just an actor bitching about this. I’m going to go fucking make something.’ ” He’s also got a plan to develop a network of sustainable farms among native Hawaiian families, helping them to improve poor nutritional habits while also generating income from tourists.

It’s now midafternoon, and there’s no sign of any more earthquakes; the brushfire up the hill has also been contained. Before I drive home, Momoa indulges me with a tattoo show-and-tell. On his left arm: a Polynesian tribal motif, with rows of triangles representing shark’s teeth. On a middle finger: an homage to a deceased friend named Diablo. His right forearm has three French words in delicate script; he got this one with his stepdaughter, Zoë Kravitz, who has a matching design. (Kravitz is Bonet’s daughter from her previous marriage to rocker Lenny Kravitz, and the rumors are true that all the blended family members adore one another and enjoy rock-climbing together.) The line is from French poet Charles Baudelaire: Être toujours ivre.